So, they’re getting rid of the four-pitch intentional walk…

To ‘improve the pace of game play.’

It just makes no sense.

Baseball’s slogan might as well be ‘good things come to those who wait.’

Even the saltiest Cubs‘ critics (myself included) have to admit-

Forcing a Game 7 & then breaking a 108-year-old curse after rain delaying extra innings is what baseball is all about.

It is about what is possible in each & every moment–

It is about inducing

If you don’t have time for that, we probably can’t be friends.

It’s baseball. No one is ‘born on second.’

A bag must be earned (& someone’s paying.)

Again, this is baseball. Not Keeping Up With The Kardashians. 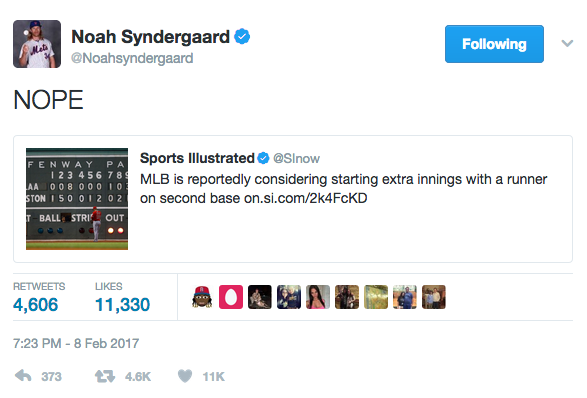 Where he & I will probably argue-

Is whether or not to raise the strike zone…

While, in a larger sense, baseball is a perfect metaphor for life–

In a smaller sense, it’s about arguing the strike zone…

I am for raising the strike zone

…But it’s not about a revenge fantasy, it’s about stats. (I swear!)

‘More and more pitchers throwing harder and harder is a brutally efficient run prevention methodology that works. The inventory of power arms only grows. That’s because throwing a baseball is a very specific skill with few variables…

Hitting, on the other hand, is a complex read-and-react skill that involves far more variables. The training gap will only grow…

Hitters have less time than ever to react—while facing more pitchers with better stuff than ever. And so the rate of strikeouts has gone up for 11 consecutive years.’

To me, raising the strike zone is an adjustment that doesn’t compromise the integrity of the game.

It would be the baseball equivalent of extending the 3-point line in basketball or, dare I even say it- establishing a 4-point line.

Unlike getting rid of the four-pitch intentional walk, it would ‘improve the pace of game play’ considerably w/ more balls in play & higher scoring games.

Now, here’s where I disagree with the Sports Illustrated article quoted above-

‘The raising of the strike zone is nothing but a small, interim step—baseball’s typical rate of change—to modernize the game. Until baseball moves to the inevitabilities of a pitch clock, a limited number of timeouts and a governor on relief pitching (such as requiring a minimum of two batters faced), everything else is just small nips and tucks that don’t amount to real change.’

Out of all team sports, baseball is the most individual.

Only in baseball do you get this mano a mano moment-

What more do you want from them?!?!

Let them take their goddamn time

❤ Your Grl On Base