2016 contained so many endings that now that it has finally ended,

I still can’t believe it.

There’s been a lot of denial,

(I just started a 1,000 piece puzzle consisting of mostly foliage.)

But that, too, must end soon.

…I think a lot of us are in the same boat.

For me, that means going back to where I left off here @ Grl On Base & piecing together the personally significant moments that happened as what started off as a downright promising year finally came to an end…

With a tragic boating accident

The death of José Fernández.

The death of José Fernández was my first ‘Is this real life?’ moment of 2016.

He spent a year in Cuban prison for attempting to leave.

On his fourth & final attempt, a wave carried someone overboard & Fernández jumped in after them-

“‘I dove to help a person not thinking who that person was. Imagine when I realized it was my own mother. If that does not leave a mark on you for the rest of your life, I don’t know what will.’

The 15-year-old Fernandez swam through the waves with Maritza clinging to his back and they reached the boat some 15 minutes later.”

Then came the headlines-

Unable to fully process the reality of the situation,

The day after his death, I made a mistake-

I left Bartolo Colón in against the Marlins.

Not an ideal way to start the final week of Fantasy.)

I realized I would need to make some big moves if I really wanted to take it to Crabtree, my year-long nemesis, the one week it really mattered.

This was the end

The Wave* was coming.

(The Wave* is an easy listening radio station & what Crabtree took to calling the sizeable group of solid pitchers he had starting toward the end of the week. He liked it so much he changed his team name to ‘94.7 The Wave.’ Diabolical.)

What happened next might best be described by one whose eloquence certainly rivals that of T.S. Eliot-

Fantasy was ending & therefore nothing (& no one) was precious any more (except for Manny & MadBum, my two Keepers. ❤ )

Crabtree was all in on The Wave. He even had a wave patch picked out for our league trophy jacket.

In the meantime, I started building shelter with walls made out of innings pitched (144.2 was the final count) & sandbags full of the best available streaming options.

It still came down to a good ol’ fashioned Sunday Showdown,

So that’s right dude, meet me at the bleachers
No principals, no student-teachers
Both of us wanna be the winner, but there can only be oooone

The O’s were looking to lock up their place in the AL Wild Card Game & I was playing for all the marbles,

So I’m gonna fight, gonna give it my all
Gonna make you fall, gonna sock it to ya

NO mistakes were made. 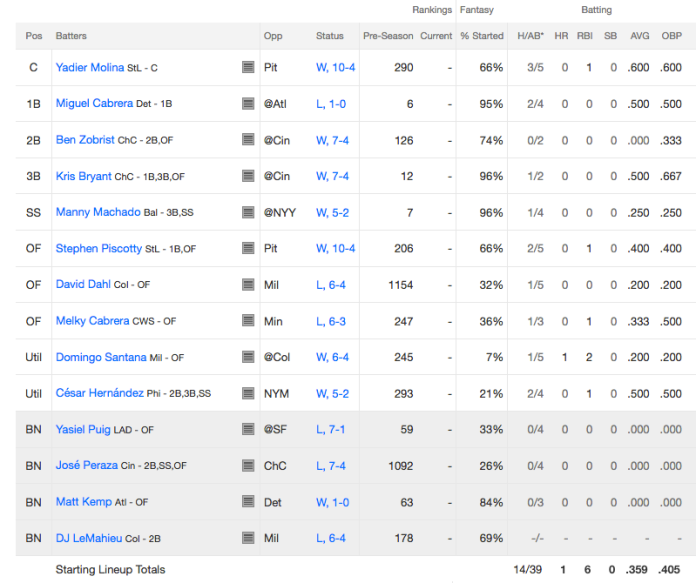 I’m the last one standing

Another one bites the dust.

It was a perfect day of perfect streaming.

Yes, the O’s would go on to loose the Wild Card Game in extra innings without using Britton, MLB’s best closer.

Yes, Trevor Bauer CUT HIS FINGER ON A DRONE & had to leave a playoff game b/c it wouldn’t stop bleeding.

Yes, I tried getting into football, b/c, hey LA has a team again & Goff is pretty cute…

Yes, Trump would wind up getting elected into office.

Yes, many more mistakes were made.

So many, in fact,

The worst case scenario is sort of what I’d come to expect,

But I am a sucker for a comeback

What I didn’t expect was Cody Freakin’ Garbrandt.

THEN HE CALLED OUT T.J. DILLASHAW

Perfect eyebrows aside, it was just an exemplary display of what sport is all about-

Ronda’s fight was the opposite.

It was like she’d manifested her own worst fears…

It kinda broke my heart.

There’s a lot of speculation that she’ll retire now & a lot of people are weighing in with their opinions.

Regardless, Ronda was the one who made it possible for women to headline a major UFC PPV event.

That’s MMA herstory & both women have their place.

Should Ronda continue her story in the UFC?

I don’t know, but I liked what Jon Jones had to say- 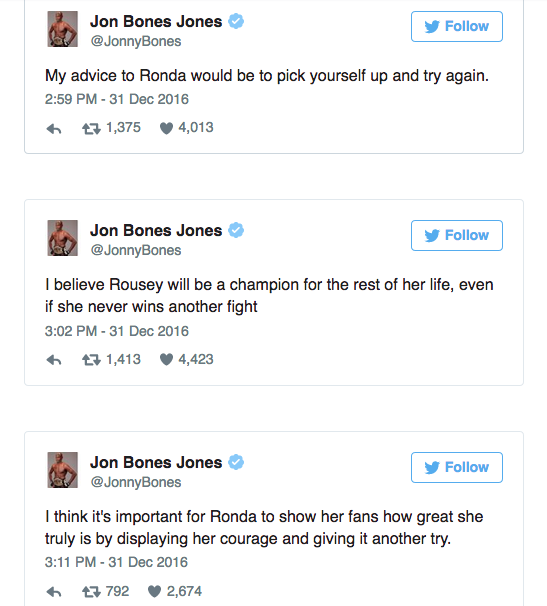 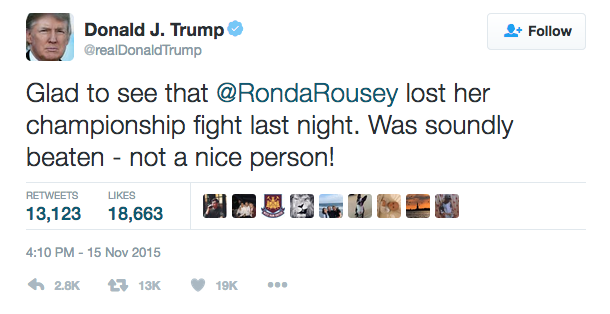 But first, I’m going to finish that puzzle

Your Grl On Base